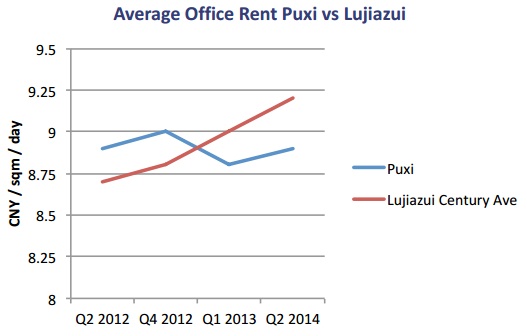 The above title and paragraph, of course, allude to Charles Dickens’ epic novel A Tale of Two Cities. To those who closely watch Shanghai’s office market, it just as obviously refers to the strikingly different trends in office rents in Pudong versus those in Puxi in recent years, a story we’ve often mentioned in this newsletter, and one best told not in words but rather in charts as below:

The first chart compares average grade A rents in Puxi to the average rent for space in office buildings along Century Avenue in Lujiazui, Pudong’s prime commercial office street. The period plotted is Q2 2012 – Q2 2014. As you can see, the Puxi average remained largely stable during the period, while the average rent in the Lujiazui Century Ave area rose by 6%.

More interesting is what has happened to rents in the most sought after buildings in Puxi vs those in the Lujiazui Century Ave area. The latter group of buildings includes such towers as the International Finance Center (IFC), Shanghai World Financial Center (SWFC) and Jin Mao Tower.

The grade A+ IFC presently commands the highest rents among these properties, with space in the building currently going for CNY 23 / sqm / day. That is 77% higher than the CNY 13 / sqm / day that offices in the building were leasing for back in Q2 2012, a mere two and a half years ago, and other prime towers in the area have seen comparably large rental increases.

In contrast, the building now commanding the highest rent in Puxi, Wheelock Square, was leasing out space for CNY 14.5 / sqm / day at most in Q2 2012, and its highest rent currently is CNY 16 / sqm / day – an 11% increase which is significant, but pales in comparison to the rental jumps at IFC and its neighbors.

Lujiazui rents are skyrocketing because financial industry firms all want to be in the crowded area and hardly any new buildings have opened there in the last two years. Puxi, meanwhile, has seen the blossoming of new commercial hubs with high quality towers that are stealing tenants away from the crowded CBDs along Nanjing Road and Huaihai Road. The opening of Shanghai Tower, despite its massive size, will not have significant effect on the overall situation.

It is fortunate that the financial industry as a whole enjoys sizable profit margins, because in Lujiazui an increasingly large fraction of those profits will be used to pay landlords.

Older office buildings in the West Yan’an Road and Xianxia Road areas of Hongqiao are renting for around CNY 6 – 6.5 / sqm / day, while newer buildings are generally asking for rates in the range of CNY 8 – 8.5 / sqm / day. The area’s hottest new addition, L’Avenue, is asking CNY 9.5 to 10 / sqm / day.

Creative spaces in the Daning area of Zhabei District are going for CNY 3.5 – 5.8 / sqm / day. Handover condition is bare shell.