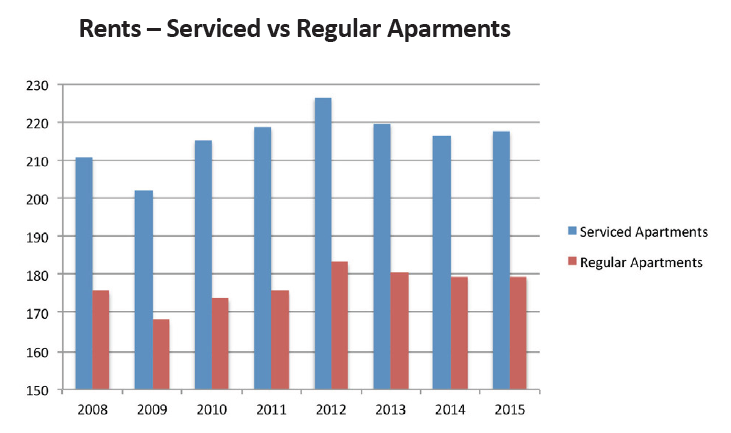 The high demand for property that is characteristic of a booming metropolis has been attracting real estate investment to Shanghai for years now. Yet while sound opportunities may be found across the spectrum of the city’s industrial, commercial and residential real estate, which niche segment offers the truly best prospects for investors today?

While the answer may vary according to the investor’s specific goals and resources, there is one market segment that stands out as a top contender to anyone who does their research: the serviced apartments sector.

Below is a list of some high-end serviced apartment projects in the city along with their associated rental range.

The strong performance of the serviced segment seems largely a result of the city’s growing headquarters economy; high-level foreign executives and their families have long been a primary driver of demand in this market, especially at the high-end of the field.

According to local residential realtors we consulted, demand for serviced residences has also been growing strongly among domestic enterprises in recent years – hardly unsurprising given Shanghai’s central role in the Chinese economy and the increasingly deep pockets of many large Chinese firms.

Other occupier groups creating demand in this market include Chinese entrepreneurs returning from overseas, and well-to-do locals who favor serviced apartments as a fashionable and convenient lifestyle choice.

Our sources note that two trends seem to be further boosting demand from multinational corporations in recent years. One is a growing tendency among these enterprises to post young expatriates to the city instead of the seasoned veteran executives they have typically sent. The corporations, apparently, are even more likely to house these young expats in serviced homes.

The second trend is a significant increase in short, project-based stays of, for example, three to six months.

Brands, Buyers Jostle for Stakes
Investors and big international property brands have naturally been fighting to seize shares of this burgeoning market, and since the first serviced apartments in the city opened in Shanghai Centre in 1990, billions have been spent on building and acquiring new developments.

Recent bulk transactions include the sale of Changning District’s 虹桥绿苑 to Nanjing-based Landsea Group for RMB 540 million last July, and the sale of Lanson Place at Xintiandi to the Zhongrong Group for 920 million RMB in September. (Note that the governmentgranted land use period for serviced apartment developments is 40 years, which is less than the 70 years allowed for regular residential properties, and transaction prices reflect the number of years of land use remaining.)

International serviced apartment brands in Shanghai include The Ascott, Citadines and Somerset brands owned by Singaporean real estate giant CapitaLand. Singapore-based Frasers has properties under its flagship and Modena brands in the city, and will be opening a Capri-branded property this year. US-based service residence giant Oakwood to date has only one Shanghai property, which is located in Putuo district.

The only real threat to the continued strong performance of the serviced apartment niche seems to be the possibility of future oversupply. Many new projects now under construction or planning include:

the above-mentioned Capri by Fraser

two more Ascott serviced apartment developments with a combined 296 units, both scheduled for completion in 2019

a 112-unit project by Thai luxury hotel company Dusit and its Chinese partner, scheduled to open this summer in Xuhui district

a 168-unit Shama serviced apartment building, the fifth in Shanghai; Shama is a brand of Thailand’s Onyx Hospitality

Changning Raffles City is expected to be handed over this March and Letters of Intention have been signed for basically all ground-level spaces.

About 20,000 sqm of the Dazhongli project in the Nanjing West Road area have now been leased out, and with less available space rents in the whole area have crept up slightly from 12.5 RMB / sqm / day to RMB 13 / sqm / day.