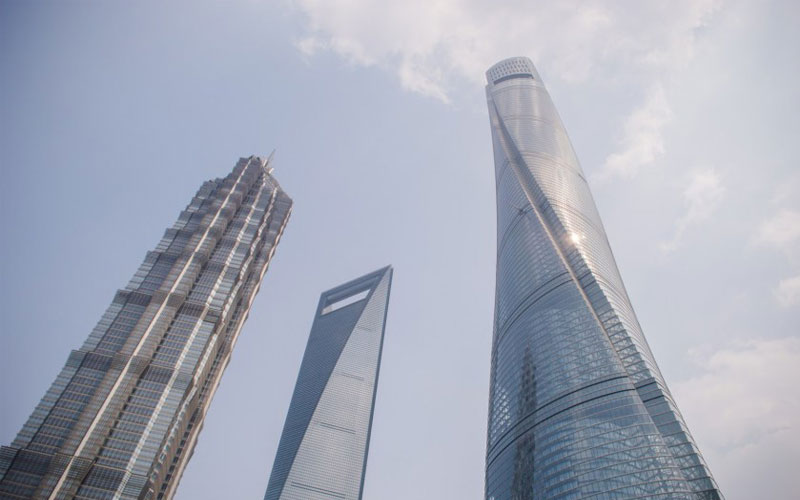 Currently in Shanghai there is a certain landmark office building that is leasing out space at rents that are 30% higher than rents at a neighboring landmark building, even though the neighboring property is arguably its equal in almost every respect, and even superior in some ways. Can you guess the names of the two towers?

In fact, the above case is just one of many instances in Shanghai where rental rates at office buildings with similar quality and location differ by a seemingly disproportionate amount. Below we look at three of these striking rent gaps and point out some of their less obvious causes, starting with the case above.Have you guessed the names of the two towers yet? That’s right, they are

Along with Shanghai Tower these two properties are widely viewed as the most prestigious addresses in Lujiazui. Both, of course, have unique advantages: IFC is a little closer to the metro, for example, while SWFC offers the views and prestige that comes with being a supertall. Yet in terms of essentials – facility management services, construction quality, design – the buildings are at similarly high levels, and it is far from intuitive why newly leased office spaces in IFC, currently renting at RMB 16 to 18, would average about 30% higher than rents for new leases in SWFC (currently RMB 12 – RMB 14). What is behind the large difference?

Given the complexities of the market it is probably impossible to fully answer that question with absolute certainty. However, we have interacted multiple times with management at both properties, and it seems obvious to us that a key reason for why IFC is presently able to charge rents that are so much higher than SWFC’s rents is the former’s approach to choosing its tenants. Management at both buildings are very selective in deciding which companies to lease space to, but IFC has by far been the most uncompromising of the two, especially in terms of rental rate.

During the first 6 months of IFC’s opening this approach resulted in a very slow rate of occupancy increase. But the inflexibility and strict focus on selecting only prestigious and financially strong companies – especially in the fields of banking, insurance, pharmaceutical, consulting and law – eventually paid off, as new prospective tenants became increasingly eager to join the building’s mix of esteemed occupiers, to the extent that they became willing to pay a premium for the privilege.

It may be that SWFC, for financial reasons or other, did not have the luxury of being so uncompromising on rental rates as its neighbor. Still, IFC’s management deserves credit for adapting, and sticking to, a wise strategy that is allowing the property to enjoy what are currently the highest per-square-metre rent revenues in the Shanghai office market.

Rents in Hongqiao Arch are currently averaging RMB 8.0-8.5, while spaces within LV Tower are renting for RMB 9.0-9.5, a difference of over 10%. While the gap in this case is far smaller than in the above example, it still seems somewhat striking when you consider that Hongqiao Arch is a slightly newer property and closer to the local metro station. In terms of quality of construction, design and facilities management, the two properties are very much on the same level.

What we believe to be a major factor causing the rent gap between these two properties, one that may not be obvious to some observers, is timing.

When LV Tower was completed in 2012, it was the only true Grade A office building in Hongqiao. Given its LVMH ownership and association with the many luxury brands in its retail podium, the building became a natural first choice for the many companies that, at the time, wanted to leave central downtown due to rising rents but not give up the prestige that their downtown address had given them. This gave LV Tower a good head start over Hongqiao Arch, which opened a year later. By now LV Tower already enjoys a high occupancy rate, and it is therefore under less pressure than its neighbor to strike bargains with potential tenants.

These two buildings in Caohejing are also of very similar quality, but rents in Belling Building are averaging RMB 3.2 – RMB 3.8 while spaces in Innovation Tower are renting for RMB 4.5-5.0. The latter’s closer proximity to the metro wouldn’t seem enough to account for such a large rent gap of 30% to 40%, so what is making tenants in Innovation Tower willing to pay so much more?

Certainly a big factor in this case is building ownership. Innovation Tower is owned by CapitaLand, a Singaporean group with long history of successful commercial real estate development, the popular Raffles City malls being among their many projects. Thanks to this history, companies generally feel confident that any building owned by CapitaLand will have first-rate facilities management services and high quality design and construction.

In our view, Belling Building also has very good design and construction, and it is also managed well. However its owner, Shanghai Belling Company, a micro-electronics manufacturer, cannot match the owner reputation of CapitaLand in the eyes of potential office tenants. In our view this perceived difference in reputations is the biggest reason for the large difference in rents between the two properties.

Some of you who read our newsletter may recall having received an email from us last December requesting your participation in an online survey about Shanghai office buildings.

Although limited in scope and not absolutely scientific, our survey produced results that we believe may be of interest to some of you and we have finally gotten around to putting them on our website.

Learn whether our 173 respondents believe the Jin Mao Tower or Shanghai Tower best serves as a symbol of Shanghai, which of the three supertalls they feel has the best design and other tantalizing tidbits at www.sofiagroup.com/survey_results/.

Occupancies in Changning haved ropped slightly, most likely due to the fact that Raffles City Changning under construction beside Zhongshan Park and the reopened City Center on Zunyi Road in Hongqiao are already counted into the overall amount of available space, even though the buildings themselves are still vacant. Shanghai Tower, which is scheduled for a June handover, has leased out close to 30% of its office space, with financial companies and law firms chief among new tenants. Corporate Avenue 5 is also being handed over around this time. McKinsey has leased 10,000 sqm in the new building.