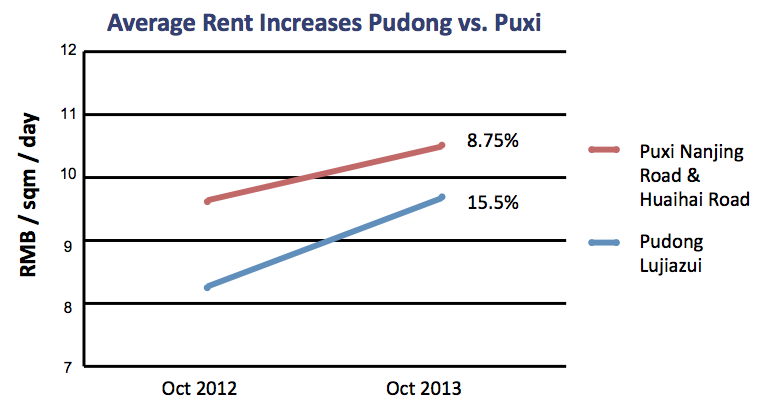 In our last newsletter we noted that after years of continuous increase, office rents in much of Shanghai have largely plateaued in the second half of the year, with rents in some grade A buildings even dropping in recent months. Two notable exceptions have been Hongqiao district in the west and the Lujiazui financial district in Pudong, where rents continue to rise at substantial rates.

The chart below may help give a better sense of the situation:

The chart to the right gives a more detailed view by examining rent rises in specific buildings. Rents for the three Pudong buildings shown, along with L’Avenue in Hongqiao, rose considerably more over the 12-month period than did rents in CITIC Square and ICC, two properties located in traditional CBDs where rents have largely leveled off.

Why is it still getting increasingly expensive to rent an office in Lujiazui and Hongqiao when rents are mostly stable in the rest of the city? In Lujiazui, occupancy rates are relatively high at around 90%, and space there enjoys high demand among financial industry companies. In Hongqiao, meanwhile, the area’s relatively inexpensive rents are one factor driving demand. The district has also become more popular since the western extension of subway line 2 and construction of line 10 made it far more accessible. In addition, it is valued for its transportation connections to other areas of China, which are expected to become even more robust as development of the Honqiao Transportation Hub continues.

With the Shanghai Tower being the only major new edifice opening in Lujiazui in the near future, it will be a while before we see rents in that district reverse their upward trend. We also see rents in Hongqiao continuing to rise as the district’s low 70% occupancy rate begins to climb and it remains a favourite alternative to expensive offices in the traditional CBDs.

Meanwhile, as rents in Lujiazui and Hongqiao remain buoyant, we believe the West Nanjing Road area will likely see a definite stabilization in rents as two new buildings open in the CBD during 1Q 2014.

A recent land auction saw the highest price per unit gross floor area paid for a piece of city land in three years. The auction took place last October, and the parcel is located along the Pudong bank of the Huangpu River between Lujiazui and the convention, exhibition and business zone of the World Expo area.

A subsidiary of Hong Kong developer K. Wah Group won the 5,665 sqm plot with a bid of RMB 568 million, which worked out to RMB 40,106 per sqm of gross floor area. The parcel is slated for residential development.

Apart from Hongqiao and Pudong, changes in the average district rents over the last two months have been largely negligible. As a whole, the city remains among the top 20 most expensive cities in the world to rent an office, but still less expensive than Beijing.

Occupancy rates are likewise not changing quickly in the districts. They remain high overall in relation to other major cities of the world.