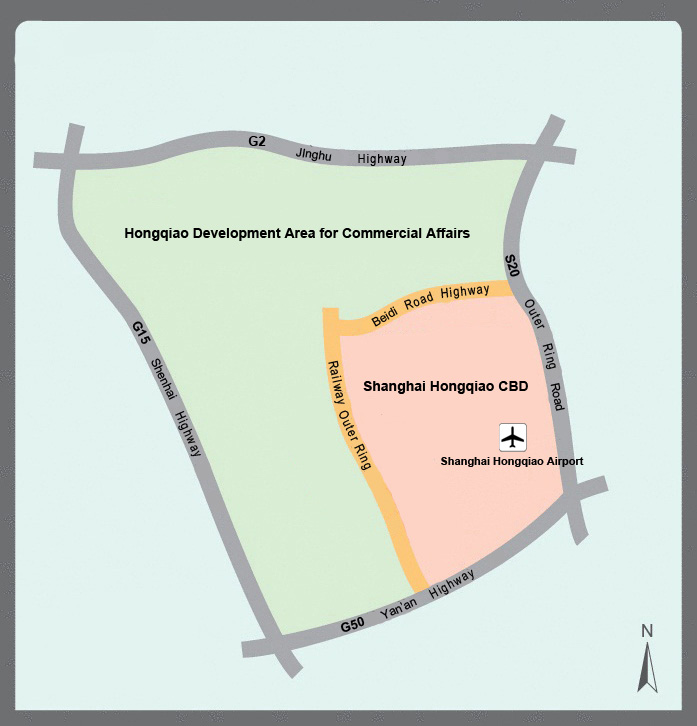 As our newsletter reader, you likely know that Hongqiao is an area in western Shanghai, and probably associate the name with the Gubei residential area and Loushanguan Road where many businesses and consulates have offices. If you’ve been paying attention to the local news, you may also have heard of Greater Hongqiao (in Chinese, Da Hongqiao), the area at the center of the Shanghai government’s plan to transform western Shanghai into a booming economic growth engine analogous to Pudong in the east. The Greater Hongqiao development plan obviously means big things for the city’s commercial property market, and so merits some examination.

What and where is it?

As a geographic area, Greater Hongqiao, as we understand it, is currently being interpreted in two ways.

First, as detailed on China’s Wikipedia Baidu Baike, Greater Hongqiao refers to a distinct 86-square-kilometre (sqkm) area in the west of the city that begins a little east of Hongqiao Airport and extends westward about 10 kilometers, stretching north-south about 10 kilometers as well. The area includes the Hongqiao Transportation Hub, with its bullet trains and buses connecting Shanghai to the rest of the Yangtze River Delta. In terms of districts, the area encompasses parts of Changning, Minhang, Qingpu and Jiading.

Second, “Greater Hongqiao” is sometimes used more loosely to refer to all the western parts of the city that will be economically and functionally integrated with the above area. Hence, many local Chinese media reports have described Greater Hongqiao as encompassing the whole of Changning district, which includes Zhongshan Park and other areas within the inner ring road.

Having two interpretations of Greater Hongqiao’s borders is not as illogical as it might seem, because unlike the districts that it is comprised of, Greater Hongqiao itself is not an administrative division of the city. It is rather an area delimited based on its intended economic and urban functions. And since these functions overlap and complement the functions of adjacent areas, just exactly where the borders lie on the functional level may not be so distinct, or for that matter important.

The development plan for the official 86-sqkm area has two main parts:

• The Commercial Functional Expansion Zone (商务功能拓展区),a 60 sqkm area that extends north and west from the Commercial Zone that will attract largely the same kind of industries as the inner area, but with greater concentration of hotels, cultural facilities and convention centers.

The emergence of Greater Hongqiao is good news for city tenants because it has been driving development of new high quality office towers in the western part of the city. These high quality office towers, of course, are renting at far lower prices than they would if located more centrally, and so offer companies a low-cost alternative to downtown Puxi locations. Moreover, as Greater Hongqiao attracts companies from the central downtown locations, it helps deflate upward pressure on rents in those latter congested areas.

As the above chart shows, average rents in Changning district have long stayed well below the averages for downtown Puxi and Lujiazui. The new office buildings going up in Greater Hongqiao, being located in the far west of Changning or beyond, are renting even lower than the Changning averages shown in the chart.

Consider, for example, two of the key commercial properties that have been completed in Greater Hongqiao so far:

• The Hub, by developer Shui On Land, is a lifestyle complex with office component adjacent to Hongqiao Airport. Its office space was recently renting for RMB 5.6~5.8 / sqm / day. Roche Pharmaceuticals is among the companies that have already moved in.

• Sky Soho, the mixed-use development designed by celebrity Zaha Hadid’s studio, is located one subway stop from the airport and was recently leasing space for only RMB 4.3 ~ 4.5 / sqm / day. Ctrip has already bought a large amount of space in the development.

Countless names for areas and properties in the west of our city contain the word “Hongqiao”, from Hongqiao Road to Hongqiao International Airport to the Holiday Inn Hongqiao Minhang. Just where does the word come from, and what area did it first refer to?

You may never even have heard of Hongqiao Town (虹桥镇), a part of Minhang District around Hongmei Road. It hardly resembles a town, as it has no defining concentration of homes or buildings, as far as we know. According to Baidu Baike (China’s Wikipedia), Hongqiao Town has a history that goes back to the end of the Qing Dynasty, and back then, the Puhuitang Canal ran across the town in east-west direction, just as it does today. At some point people noticed that if you stand on a bridge over the Puhuitang after a summer rain, a rainbow often appears in the west. And so the town was named Hongqiao, which is Chinese for “Rainbow Bridge”.

Rents in the Cura Tower onHongqiao Road, Xujiahui district,have inched up to around RMB7.5-8.5 / sqm / day. This andother observations make ussuspect Xujiahui rents in generalare going up a bit.

About 300 sqm of space openedup in Lujiazui recently, but ofcourse that amount won’t domuch to bring down rents there.

As noted in above Snapshotsection, offices in ChamtimePlaza are renting at 5.0 – 5.5 /sqm /day. That is actually high forthe Zhangjiang area of Pudong,where the average rent is morelike RMB 4.5-5 / sqm / day