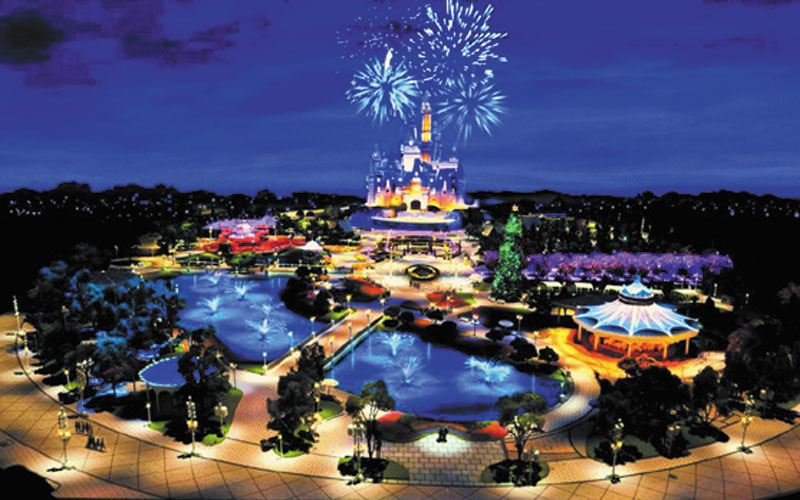 The myriad of spaces where economic activities are carried out in Shanghai becomes enriched with a host of spectacular new additions in 2015. The new developments include fantastic office towers that are making world headlines, chic luxury hotels of distinctive character, properties offering encounters with lifestyles and culture and a mushrooming of shopping malls that surpasses even last year’s. Below we present a list of some of the more significant and interesting of these project launchings.

Shanghai Disney Land
Expectations are sky-high for China’s first Disney Theme Park that will open in Chuan Sha New Town in Pudong at the end of the year. The development, built with an investment of some US$3.7 billion, covers an area of 963 acres and includes two theme hotels, a lake and an entertainment district in addition to the Disney Land itself. Three times larger than Hong Kong Disney Land, the only other Disney Land in the region, its anticipated millions of yearly visitors are expected to generate 50,000 new jobs for the Shanghai’s economy.

Eslite BookstoreThe opening of Taiwan’s famous bookstore chain Eslite in Shanghai Tower is highly anticipated among local residents, and is important also in the sense that it is the first such large foreign-owned bookstore in the city. The store will take up levels 52 and 53 of the tower, as well as a basement level, and it will include dedicated reading areas and other customerfriendly amenities.

Bund Financial CenterAs the first major financial center on the western bank of the Huangpu, the BFC is a very important property as it presents a new alternative for financial firms in crowded Lujiazui. Fosun Group, one of Shanghai’s largest investment firms, is the developer. The project includes a north zone with four 12-story buildings, two of which are for sale, while the south zone has one conventional office building, a boutique hotel, an art center and other lifestyle-oriented facilities. Handover was scheduled for end of 2015 but may be delayed to early 2016.

Shanghai TowerFor a detailed overview of Shanghai Tower see the April 2014 edition of this newsletter. The handover of China’s tallest building is scheduled to take place in June, and although the owner has confirmed that several spaces have been leased their names have not yet been announced. We do know that Allbright Law Offices, one of the biggest domestic law firms, is one of them, as well as several fine dining establishments.

ICC Phase 2Construction on the second of the twin office towers of Shanghai International Commerce Centre (ICC) on Huaihai Middle Road should wrap up the first quarter of this year. The project by developer Sun Hung Kai Properties also includes a high-end residence building and the IAPM shopping mall. One of the unique features of this office property is the three- and four-metre heights of its ceilings.

3 Corporate AvenueScheduled to open in May, this new and final edition to Shui On Land’s Corporate Avenue offers what many see as one of the best locations in the city, right beside Xintiandi and Taipingqiao Lake. The project is being built to meet LEED Gold Standards.

Raffles City ChangningInitially scheduled to open this year but now more likely opening in 2016, Raffles City Changning will be the Zhongshan Park neighborhood’s premier office property, while it’s mall will become a strong competitor to the nearby Cloud Nine shopping centre.

Shopping MallsAn amazing 36 new malls will open in Shanghai and its suburbs in 2015, ten of them located in Pudong. (The soon-to-open Shanghai Disney Land is expected to bring traffic to many of the latter.) Following are brief details on four of the more interesting ones.

New World Daimaru MallLocated at 163 Nanjing East Road, this is perhaps the year’s most high-profile new shopping center opening in the central downtown area.Daimaru is one of Japan’s largest mall operators and is showing some bravery to open at time when Sino-Japanese relations are hardly warm. The new property will offer a mix of high- and middle-end imported brands for sale across its 116,000 sqm of floor space.

Crystal GalleriaLocated at Changde Lu and Yuyuan Lu in Jing An district, Crystal Galleria already had its soft opening last year and targets a young and fashionable crowd. Trendy design, a top-floor KTV house and a high percentage of F&B retailers are among its attractions.

Bulgari ShanghaiAnother elite brand joins Shanghai’s five-star luxury hotel scene this year when the world’s fourth Bulgari Hotel opens along the banks of Suzhou Creek. The exclusive hotel will occupy the upper 12 floors of a 40-story building designed by Foster & Partners (also architects for Bund Financial Centre). Bulgari Hotels are renowned for their stunning Italian-designed interiors where every detail is given the closest consideration.

W Shanghai – The BundThe luxury hotel brand for the young and hip, W Hotels opens its first Shanghai property this year in a flashy new tower by the Huangpu north of the Bund. The youthful W brand culture shows itself in quirky nomenclature used for its hotel facilities: the lobby is called “Living Room”, swimming pools are known as “Wet”, laundry bags are named “Wash”. The group’s website and mobile phone app, meanwhile, let’s you listen to streaming music from trendy Djs.

Occupancies and rents in Jing An, Huangpuand Luwan districts seemed to have finallystabilized to good degree, thanks to thefact that no new properties have openedin these areas recently.