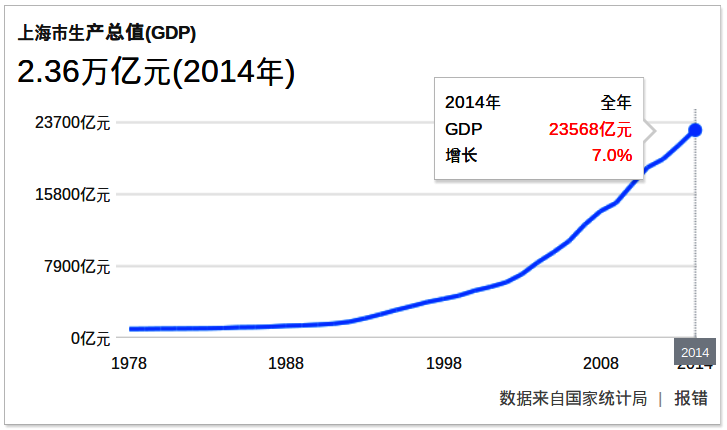 Economic activity is the key factor determining demand for office space, and in an international metropolis like Shanghai, both the national and global economies exert strong influence on the local business situation. Forecasting the outlook for Shanghai’s office space demand, therefore, is basically a question of economic healthon the global, national and local scales.

Since even recognized economists vary greatly in their projections on China’s development for the coming five years, we are not going to play the clairvoyant here. Instead, we would just like to offer a perspective on the local economy and relevant observations on aspects influencing the market. Limited perspectives, after all, can sometimes reveal insights about things beyond their geographic and temporal horizons.

Growth in the city’s economy for the first three quarters of 2015 was calculated as 6.8%, a bit slower than 2014, but the services sector expanded by a healthy 11%. Shanghai ranks #1 in terms of GDP among all cities in China, and its GDP has been rising for many years.

Current office occupancy and rental rates point to unequivocally strong demand from businesses in the city. In the Lujiazui financial district, occupancies are in the high 90s. In Puxi, they hover around 90% in the traditional CBDs. (See the Market Notes at the end of this newsletter for a detailed chart.)

Office rents are at all-time highs in Lujiazui and still increasing. In Puxi, rents are at their highest since the financial crisis, their rate of increase mostly slow or moderate depending on district.

Demand in the retail sector is also looking healthy. According to the city statistics bureau, retail consumption in the first three months of 2015 increased 8% over the same period in 2014. Vacancy rates across the entire city average at roughly 10%. It has to be noted though that all brick-andmortar retailers are affected by the increasing amount of online shopping taking place, and that luxury suffered considerably during 2015, a fact that most people regard as an effect of president Xi’s anticorruption campaign.

New construction is also an important economic indicator, as it reflects confidence in the future, indicates whether there will be room for growth, and also contributes to the economy itself. As we explained in recent issues, there is an enormous amount of new commercial construction going on inthe city. Total available office space in Puxi will roughly double over the next five years, while in Pudong space will increase by nearly a half.

The Shanghai economy is benefitting from a wave of technology and business innovation in China that is being discussed intensively in the national media. The emergence of P2P platforms including Weixin, as well as crowdsourced financing, are among the facilitators of this trend. The city hasa booming start-up scene in which both young foreigners and Chinese are taking part.

Shanghai has the highest average disposable income of all cities in China, and in 2015 it reached CNY 45,900 or USD 6,900 per person per year according to a recent China Academy of Sciences report.

During the 2010 World Expo, our city’s subway system had a total length of 420 kilometres and was already being touted as the longest in the world. According to some lists the title has since been stolen by the Seoul Metro, but it is nevertheless impressive how the Shanghai Metro continues its rapid expansion. By 2020, its total length will reach nearly 800 kilometres. The map below shows the new tracks being laid during the 2015 – 2020 period.

So what does this snapshot of our city’s economy tell us about the five-year economic forecast and future demand for office space in Shanghai?

Nothing definite. But among these facts we can discern something that may at least help inform ourjudgment, and it’s something that economist seem to often overlook when cooking up their predictions. We are talking about the extent to which people take the initiative to create and seize economic opportunities, fix problems and generally improve their lives. To use a philosophical term, ‘human agency’ seems to be flourishing here in Shanghai, and it is safe to say by extent that it is also flouring in much of China. In our opinion, this needs to be taken into account when considering the current slowdown in economic growth or the possibility of a more serious economic crisis. It isone of the many factors to consider, and an important one that is too often overlooked.