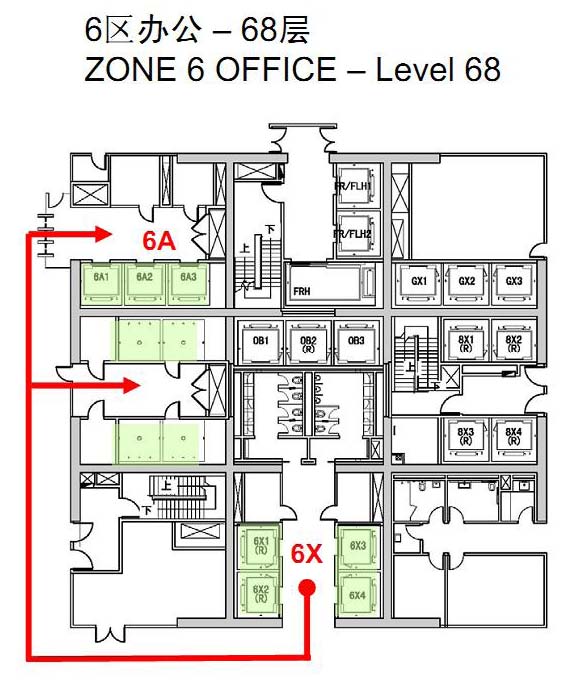 Although construction on Shanghai Tower will continue for about a year longer, management from many potential tenants have already inspected the site and the developers will be opening an office space show floor soon. Besides being the tallest building in China, the landmark property has a number of unique features that make it attractive as a place for work and business, and interest in its office space will surely be high.

Companies interested in renting space within the building may therefore want to act early in order to secure the most favourable lease terms possible. Generally speaking, tenants have more leverage with a landlord during the first six months after a building opens, and until about 50% of its available office space is taken up. During this period discounts of up to 35% over the asking rate are often possible, while afterwards discounts start to shrink considerably.

Shanghai Tower is designed as nine concentric cylinders stacked one on top of another, each cylinder 12 to 15 stories high. The cylinders, which narrow as they ascend, are enclosed by one inner and one outer skin of glass, the space between the two glass skins comprising nine atriums that contain, on their ground floors, gardens, restaurants, cafes and more. The developer refers to each atrium together with its corresponding cylindrical section of building as a “zone”.

Office space for lease in the building is located on the second to sixth zones, which take up floor 8 to floor 81 of the 121-story tower. The landlords are only considering the lease of whole-floor units presently, and smaller units consisting of only part of a floor are expected to become available eventually. The amount of floor area varies by zone as follows:

Below is a diagram of one of the floors:

How expensive will it be to rent space in Shanghai Tower? The landlord has indicated that opening rates are forthcoming, but we can make an educated guess based on current rents at the two nearby supertall buildings: offices in the Jin Mao Tower are renting at about 12 to 13 RMB / sqm / day, and in SWFC they are renting at around 13 to 14 RMB / sqm / day. We expect the developer of Shanghai Tower to set opening lease rates at levels equal or higher than the rental range at SWFC.

• Will have 106 Mitsubishi elevators, including three high-speed units that can reach 40.3 miles per hour (18 metres / second)

• Will have the world’s highest open observation deck

• Will have the world’s highest hotel, a Jinjiang Hotel occupying floors 84 to 110

• Exterior lighting is to be powered by 270 wind turbine generators

• Property will be managed by CBRE Group

The Hollowing Out of Huaihai Middle Road

As reported widely in local news, the last six months have seen an exodus of long-time retail tenants from the section of Huaihai Middle Road that lies between Ruijin Road and Chongqing Road, an area that was long considered one of the city’s prime retail strips.

The retailers are moving out for two reasons. First, pedestrian traffic along that section of street has declined dramatically in recent years as the city’s many new malls – particularly the nearby K11 and APM malls – drew traffic their way. Second, landlords of the street-side properties refuse to lower their rents: They are, it seems, overly confident regarding the value of their retail properties or haven’t realized yet that there location is no longer one of the city’s top retail spots.

How the situation develops will be interesting to watch. Will the strip simply transform into a place for low-end retail? Or will these landlords, perhaps with the help of outside developers, transform their properties into something that can better compete with the new malls, or something entirely different? At this point, all we can do is stay tuned.

Lujiazui hasn’t seen a new building open in about two years and tight supply and high occupancy rates continue to push rents up in the district. West of the Huangpu, significant numbers of firms are showing interest in moving into the new Henderson 668 building on Nanjing West Road after it opens in the latter half of the year. Over at Xintiandi, meanwhile, Corporate Avenue II is already about 70% leased and is commanding rents of around RMB 14 / sqm / day.